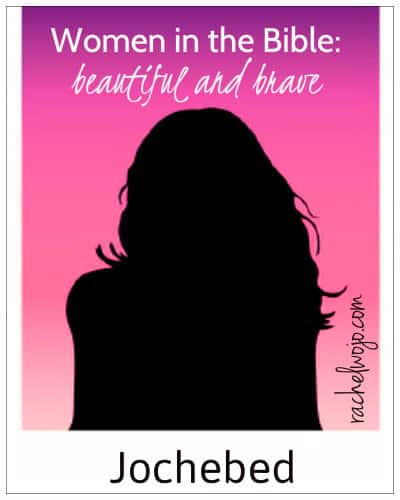 This week our featured guest is “Jochebed Who Risked Creatively.”

As an Israelite woman, it was a terrible season to be pregnant. Blessed by God, the children of Israel had multiplied greatly in Egypt, even under the bondage of Pharaoh. Pharaoh realized the risk involved with the Israelite’s rapid population growth. His resolution to the problem? Have the midwives kill the baby boys born to all Israelite women. Faithful to God, the midwives did not follow through on Pharaoh’s command. As the story unfolds, Pharaoh then declares for all baby boys under age 2 to be cast into the river.

I can’t imagine the sorrow associated with such a command. But we do know that one woman’s story didn’t end in the river.

And when she could no longer keep him quiet, she creatively took a risk. She threw him in the river- but just not according to Pharaoh’s instructions. Crafting a small boat unlike anything Etsy can boast, Jochebed gingerly placed her precious baby boy in it. The Bible doesn’t tell us this, but I believe she purposely chose a place in the bulrushes close to the bathing spot of Pharaoh’s daughter. Maybe not. Maybe God led the steps of Pharaoh’s daughter exactly to the “random” place where baby Moses (recognize that name?) cried from his baby bed boat.

Either way, Jochebed left a guard over little Moses, his older sister, Miriam. And when Miriam saw the interest of the Pharaoh’s daughter, she graciously offered to find a nurse for the baby. Just so happens that the nurse was her mama. And the baby’s mama.

And Pharaoh’s daughter said to her, “Take this child away and nurse him for me, and I will give you your wages.” So the woman took the child and nursed him. Exodus 2:9

I wonder what it was like to get paid for caring for your own baby.

Do you think Jochebed just soaked up every minute with her sweet boy since she knew that ultimately, she would one day take him to the princess of Egypt, possibly never to see him again?

It’s easy to see the bravery of the mother of God’s chosen leader of the Israelites. But her beauty? I believe her beauty was her ability to think outside the box. God used her creative ingenuity to not only think of the plan to save her baby boy, but also, her very own hands to fashion a baby boat that would survive the water of the Nile.

God specifically chose Jochebed as the mother of Moses.

When God gives an assignment, he always provides the tools to follow the plan.

Or another way to say it?

Where God guides, he provides.

Check out this profile of Jochebed, beautiful and brave.

For Jochebed, the hand that rocked the boat is the one that ruled the world.