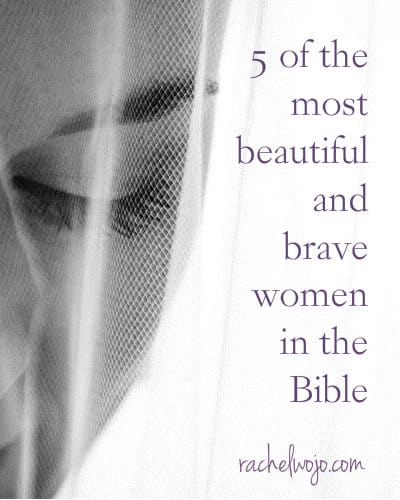 Last week at women’s Bible study, I was reading the story of Paul and Silas singing praises to God in the prison; it’s one of my very favorite New Testament Bible stories. If you’d like to read it, you can find it here: Acts 16:18-40 But as a result of thinking on my favorite Bible stories and characters, after teaching the study, I reflected on some of my favorites in the Bible. And here is a list of 5 of the most beautiful and brave women in the Bible, in no particular order:

Alright, so Sarah started out a little risky with her inability to give God the control. God told Abraham that he and Sarah would have a child and when His timing didn’t match Sarah’s, she chose to help God out a bit by giving Abraham her handmaid. Wow- that’s all I have to say about that. Another age and another culture. However, Sarah is on my list because even after she tried to help God fulfill His promise and obviously failed…and even after she laughed when the angel told her she was pregnant with child, at age 90, no doubt, she is still listed in the Faith Hall of Fame in Hebrews 11.

By faith Sarah herself received power to conceive, even when she was past the age, since she considered him faithful who had promised. Therefore from one man, and him as good as dead, were born descendants as many as the stars of heaven and as many as the innumerable grains of sand by the seashore. Hebrews 11:11&12

I’d say that any woman in that hall is a favorite of mine.

If you wanted to meet a woman who truly lived before her time, Deborah is the girl. As a judge in the age where everyone in Israel did that which was right in their own eyes, Deborah set a standard that was unheard of. It was so unheard of that her fellow judge, Barak, wouldn’t go to battle without her, even though God had told him to do so. I’d like to know what Deborah ate for breakfast and maybe even how much she weighed. She certainly had the courage to tell Barak what to do:

And Deborah said to Barak, “Up! For this is the day in which the Lord has given Sisera into your hand. Does not the Lord go out before you?” Judges 4:14

Hannah’s prayer path moved victoriously from a tiny verse with a big request to 11 verses praising God for how she saw his glory through her life. Though the beginning of her story paints  a quiet, mousy, anxious picture of a woman, we learn that Hannah grew to be a mama with some clout. God answered her request for a baby and she, in turn, gave him back to the Lord. I love everything about Hannah’s story- especially her brave walk from focusing on the negative to asking God boldly for change to praising God for the positives in her life. Hannah’s life divulges life lessons from which we can all benefit.

And Hannah prayed and said, “My heart exults in the Lord; my horn is exalted in the Lord. My mouth derides my enemies, because I rejoice in your salvation. I Samuel 2:1

As a woman who broke the trend, Ruth made a decision that impacted her lineage forever. With all the men of her family gone, Ruth refused to return home to her own family and leave Naomi, her mother-in-law, as a widow to fend for herself. Her decision to remain with Naomi fueled her forward to gleaning the fields for the remnants left behind. This was the way she would feed herself and her mother-in-law and in the mean time, God saw to it that she would glean in the field of a kinsman redeemer. A man who had the power to pay the price and bring her to himself as his bride. Ruth’s willingness to work hard and humble herself provided an opportunity to be loved.

Then the women said to Naomi, “Blessed be the Lord, who has not left you this day without a redeemer, and may his name be renowned in Israel! Ruth 4:14

Mary, sister to Lazarus and Martha

When she heard Jesus was at the Pharisee’s house eating dinner, she made a bold move to show her love for him. As she wept over his feet and anointed him with expensive ointment, the critics emerged from the crowd. Though she was a sinful woman, Jesus hushed the critics with a short story explaining the depth of forgiveness. This same sinful woman is the one Jesus tells us “chose the better part.” In John 11:2, John explains that Mary had a brother, Lazarus, who was ill. And in Luke, we are told that while Martha was burdened with household chores and hostessing duties, Mary chose to sit and listen to Jesus’ teaching. I love Mary with her boldness, her self-abandonment, and her devotion to Christ and his word. How my heart longs to be more like Mary- continually holding fast to truth.

Mary has chosen the good portion, which will not be taken away from her. Luke 10:48

I’d love to hear which woman in the Bible captivates your attention. Which one do you desire to emulate? Or who is the one you wish you could have over for coffee? I’d love to hear about her today!

Have a terrific Tuesday!