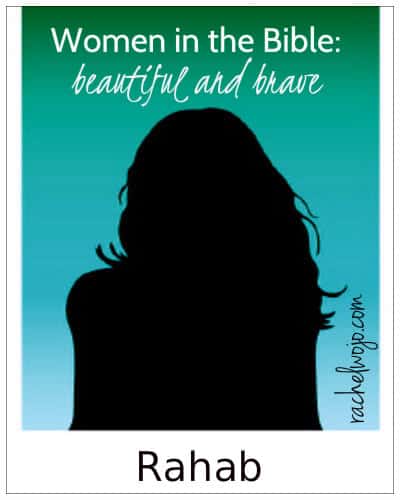 This week our featured guest is “Rahab Who Believed Courageously.”

Imagine the children of Israel FINALLY making it to the Promised Land after 40 years of wandering in the wilderness. I feel sure that they were ready to stop living in tents and settle into the richness of Canaan. The torch of leadership passed to Joshua and he is sending in a couple spies to check out the city of Jericho where we enter the story. The spies enter the land and somehow make their way to stay in a harlot’s house. The harlot’s name is Rahab. The story gets juicy.

Someone told the king of Jericho that the spies were staying at Rahab’s house.

Great. Tattle tales. So Rahab forms a plan to hide the spies on her rooftop, under the flax that had been laid out to dry. What a terrific hideout! I feel confident that this little decorating trick would have made Pinterest for sure. She then tells the king’s men: “Yes, they were here, but they left already” and the king’s men pursue the chase outside the city, just before the city’s gate is closed for the night.

Now I love that Rahab was smart enough to outwit the king’s men. And I love her creativity in using the flax to cover up the spies from Israel. But what I love the most about this part of her story is in Joshua 2:9-11:

(she) said to the men, “I know that the LORD has given you the land, and that the fear of you has fallen upon us, and that all the inhabitants of the land melt away before you. For we have heard how the LORD dried up the water of the Red Sea before you when you came out of Egypt, and what you did to the two kings of the Amorites who were beyond the Jordan, to Sihon and Og, whom you devoted to destruction. And as soon as we heard it, our hearts melted, and there was no spirit left in any man because of you, for the LORD your God, he is God in the heavens above and on the earth beneath.

More than anything, Rahab realized who the God of the Israelites was and she named him for it: God in the heaves above and on the earth beneath. She also recognizes that God gave her land to Israel.

So the story goes that Rahab lived on the wall of the city and because she hid the spies, a promise was made to save her when the city would be overtaken. A scarlet cord was to mark the wall where her home was and before Jericho’s walls were knocked down from the inside out (yes, that’s what really happened! Only God!) then, Rahab and her entire family were brought to safety.

This story is certainly stoked with beauty and bravery, but I don’t want you to think the story ends there. It would seem the “and they all lived happily ever after. The End.” kind of story ending.

But you know what God did for Rahab? He not only brought her out of Jericho safely, but Rahab, the harlot, was privileged to be in the lineage of Jesus. Rahab is the mother of Boaz, the kinsman redeemer of one of the beautiful and brave women  in our series, Ruth.(Matthew 1)

AND Rahab is listed in the Hall of Faith! Check out Hebrews 11:31:

By faith Rahab the prostitute did not perish with those who were disobedient, because she had given a friendly welcome to the spies.

When one accepts a God makeover, brokenness reveals beauty and bravery.

Oh Friends. this one principle derived from Rahab’s story gives a broken girl like me so very much hope and strength. Maybe you too?

Check out this profile of Rahab, beautiful and brave.

I have to wonder if Rahab proudly wears scarlet in Heaven. Either way, she’s beautiful. And brave.

Each week I want to highlight one of the posts linked up in the previous week. This week, Mel’s post on believing God is always in control hit home with me. Check out her wonderful post here.