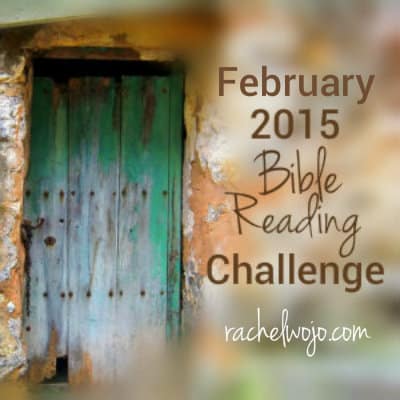 I can hardly believe that we are once again at the end of the monthly Bible Reading challenge! If you are reading Proverbs through with us for the month of February, the plan is one chapter a day, with the exception of the last three days of the month. Although we are finishing up this Saturday, I’ve decided to summarize the final readings in this post.

Proverbs 21 is a chapter full of the short pithy sayings we naturally expect in the book of Proverbs. From a feminine perspective, there were two verses that stood out in my mind:

It is better to live in a corner of the housetop than in a house shared with a quarrelsome wife. Prov. 21:9

It is better to live in a desert land than with a quarrelsome and fretful woman. Proverbs 21:19

Did anyone find it interesting that these two verses worded so similarly are listed so closely in the chapter?

Chapter 22 contains many short, punchy sayings as well. Last month as I was reading, I could see a thread of the importance of choosing friends wisely. This month, I saw another thread- social injustice. Solomon mentions several times how to treat the poor and what the attitude of the rich should be.

In chapter 23, the tone of Solomon’s seems to be imploring his son, almost begging him to remember the importance of these wise sayings and reiterating how much he is loved.

In chapter 24, Solomon is giving his son some advice on how to use his “people skills.” Choosing friends wisely, overlooking the failure of enemies, and not allowing enemies to have power over you are all topics that Solomon covers in Proverbs 24.

With patience a ruler may be persuaded, and a soft tongue will break a bone. (ESV)

By long forbearing is a prince persuaded, and a soft tongue breaketh the bone. (KJV)

I believe Solomon was telling his son, the younger generation, to have the right attitude when making a request of authority. And don’t give up easily- old folks don’t like change; sometimes it takes them a while to come around. But if you have patience, they can be persuaded when the situation is right.

What did you think Solomon’s point was in verse 15?

No matter which Bible translation you read, in chapter 26, you may have noticed one very common word: “fool.” This word is difficult to duplicate in meaning, but we know it means the opposite of wise. A fool is someone who is not in the habit of making good decisions.

How would you define “fool?”

The first two verses of chapter 27 caught my attention right away during this read-through.

I can’t recall mentioning the issue of pride in our Proverbs summaries, but Solomon does warn his son of the issue of pride multiple times in various ways throughout the book of Proverbs. Neither of the two verses in this chapter use the word “pride” but they certainly describe acts of pride.

Chapter 28 contains nugget after nugget of wisdom, but I did pick out a few favorites:

A leader who is a great oppressor lacks understanding, But he who hates unjust gain will prolong his days. (v. 16)

He who gives to the poor will never want, But he who shuts his eyes will have many curses. (v. 27)

I believe that chapter 29 is another “people” chapter. Solomon clearly desires for his son to have discernment in business deals, daily conversations, and general attitudes. Each proverb emphasizes building godly character, decision by decision.

Which verse from chapter 9 stood out to you?

Proverbs 30 is not written by Solomon, but by Agur. The difference in the style of writing is distinct and I enjoyed the more lyrical, flowing style for a change of pace from the short, punchy phrases.  I love verse 5:

Every word of God is tested; He is a shield to those who take refuge in Him.

Proverbs 31 was not written by Solomon either and yes, there is again a difference in lyrical style. The Proverbs 31 woman is both loved and hated. Held up as the epitome of a Christian woman and yet often thought of as being unattainable, there is much to be learned from her life of living for Christ and others.

Wow! I have so loved the Proverbs Bible reading challenge and reading the book of Proverbs twice in a row made it all that more meaningful. 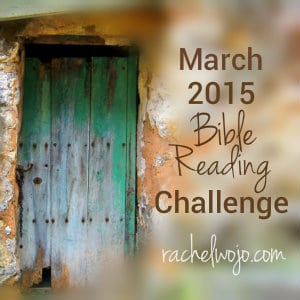 For the March Bible Reading Challenge, we are moving over to the New Testament and we’re going to read all but one of the General Epistles, one chapter a day, in this order:

Hope you’ll join in; I’d love to hear from you today, both your thoughts from this week’s Proverbs reading and questions, as well as if you’ll be joining us in March for the Bible reading challenge!

Thanks for your patience and understanding as we work through the readings together!

PS: I had planned to post the March Bible reading challenge today (Thursday) and the Proverbs summary tomorrow. But my flight was canceled this morning and I wound up with a lot less work time due to making the switch, etc. I’m at the RE:Write Conference,in Austin, TX,for the weekend. I pray your weekend is full of whatever God has for you! 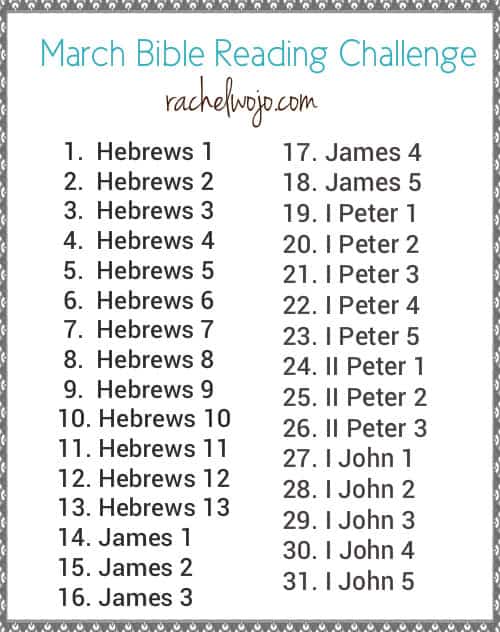 You can click on the graphic above to open a PDF that holds two printable copies of the schedule. Share one with a friend!