The clover flower stood in the middle of the entire bed.  No more important than the ones next to it, the purple seemed to be magnified against the sea of green surrounding it.

In the middle of dividing players into teams and demonstrating how to dribble a soccer ball, one little player put on his most determined face and revealed his best footwork, which was awkward to say the least.   His grit was larger than life and I loved watching his unabashed battle to get that ball into the goal.  After several attempts to kick it in, he finally succeeded.  At this point, I think I cheered louder for him than any child before him.   We high-fived and he began to kick the ball back to his team when suddenly, as he is looking down at the ground, he comes to a stop.

Wondering what grabs his attention, I stop beside him.

At that moment, he picks up “the flower” from its background of green clovers and hands it to me with a smile.

Then he runs off to the back of the line, not even glancing back at the soccer ball or me.

In the middle of his concentrative efforts, contentment for his performance had overcome his spirit.

But in spite of his success, he didn’t forget me- the person who helped him, encouraged him, and cheered him on along the way.

I didn’t need his thanks; it was enough joy to watch his success.

But how touching that his sweet soul paused in the victorious moment to show appreciation.

When was the last time you thanked someone for their support and encouragement?

When was the last time you gave God the praise for His never-ending support?

I’m off to do those two things.

And I’m challenging you to do the same.

I would love it if you’d leave a comment of thanks to God and/or someone else who has lifted your spirits at the exact time you needed it. 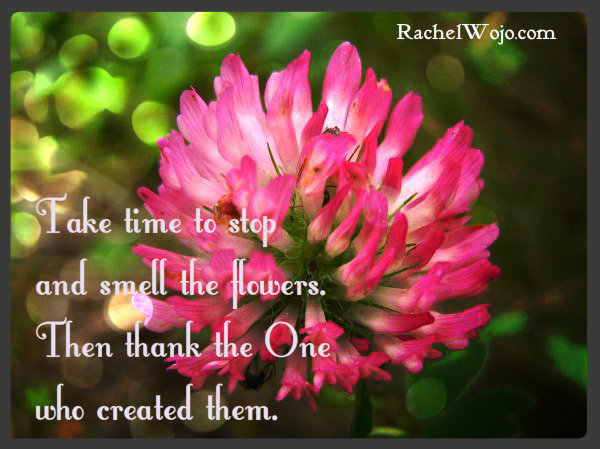