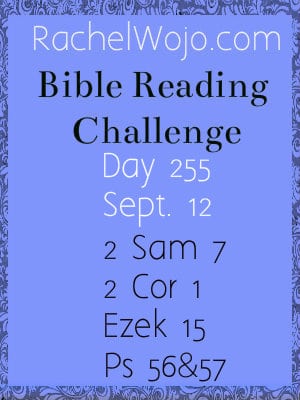 Have you ever been at the bottom and feeling completely alone?

Recently I was reading I Sam 22 and found myself pausing to reflect on the predicament of David. He had been forced to flee from Saul and leave his best friend, Jonathan. He first went to the king of Gath, but shortly found himself in potential danger.

So he became a cave dweller.

A cave dweller was the lowest socioeconomic level of the culture. With no inheritance and no friends, David had hit rock bottom. Get it “rock”- “cave?” Ok, sorry.

At this horrible point in his life, he had already been anointed as king of Israel, but he had not been allowed to hold the throne. His crowning time had been delayed. His growth process was still in progress, in spite of all that he accomplished and the expectations he had exceeded.

Saul had slain his thousands, but David his ten thousands.

His incredible achievement seemed to serve as his demise. At least in those moments of living in the cave. David’s family did come down to the cave to him. I find that fact comforting.

But then verse 2 of I Samuel 22 grabbed my attention:

At the bottom of David’s cave dwelling experience, the other outcasts rallied around him.

His devout army didn’t come from the king’s finest lineage.

They were a stressed out bunch

I’m guessing the king just laughed about David’s little rag-tag army. He probably felt that they were all crazy. How would they ever survive against his professional troops?

And David remained in the strongholds in the wilderness, in the hill country of the wilderness of Ziph. And Saul sought him every day, but God did not give him into his hand. I Sam. 23:14

It’s an interesting story, isn’t it?

God gave David an unlikely army and total protection, when he was at the very bottom.

I wonder what God wants to bring out of the caves in our lives.

Because I believe that cave-dwelling experience in your life is

really just a “But God” moment waiting to happen. 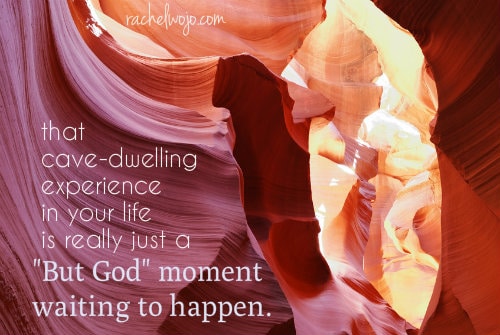 Are you at rock-bottom?

Based on this story, I would say its time to

and watch for the incredible experience that follows the words:

Have you ever had a moment you knew was a “But God” moment? Will you share it with us?